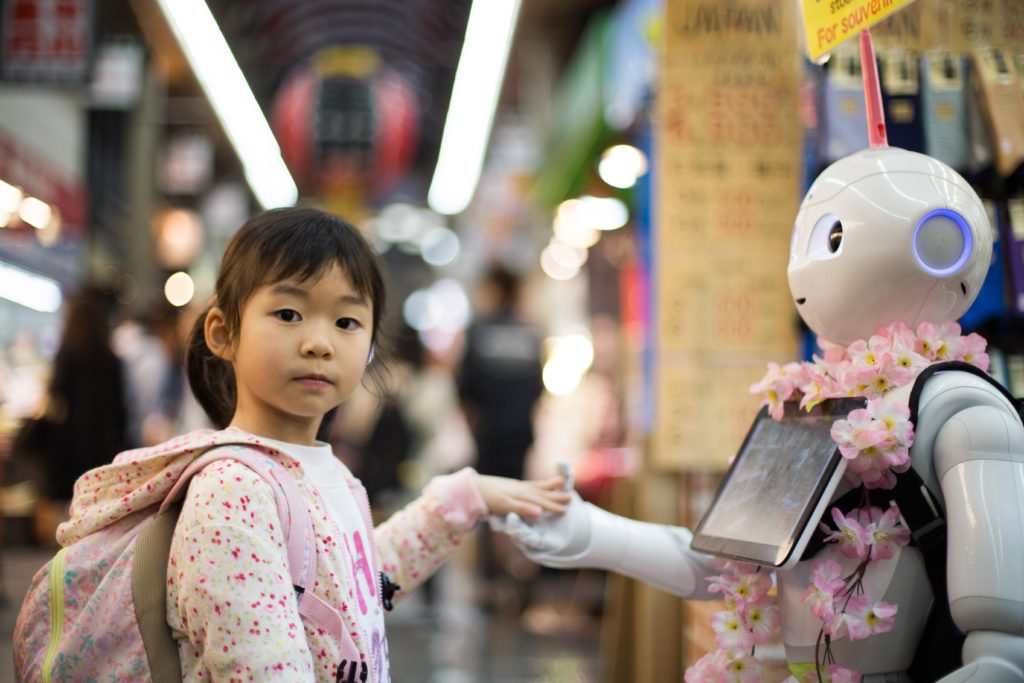 A post-apocalyptic world where humans are nearly extinct and a humanoid robot is tasked with the mission of repopulating humans on the planet Earth. This is not a figment of my imagination but the plot of a Netflix movie, “I am Mother”. Discussing this intense thriller movie would be really engaging but unfortunately, it would be a bit tangential to the topic at hand. Instead, it is quite interesting to focus on this one aspect of the movie, which is the relationship between the humanoid robot and the human child.

In the movie, the robot portrays the role of a sort of a surrogate mother and a caregiver of the newly born infant. This intriguing bond which is shared between them is the crux which will be explored in this article.

One of the defining characteristics of human beings which separates us from other animals on this planet is the social interaction amongst humans. A major aspect of survival depends on the social interaction one human has with another. Such interactions were pretty simple back in the prehistoric ages but in the modern world, they have evolved and taken up a complex form. And understanding social human interaction has been one of the major fields of neuroscience and psychology.

Attachment Theory is one such study of social interaction which explores the attachment behaviour portrayed by humans. John Bowlby, the psychiatrist responsible for the conception of this theory, shifted the classical theory of associating human attachment shown in infants from a stimulus (for example, food provided by a human caregiver) to a more emotional connection with a human.  This theory was confirmed to a great extent by Harry Harlow in his work involving newly-born monkeys (McLeod, 2017).

An arousal-based model controlling the behaviour of a Sony AIBO robot during the exploration of a children’s play mat was designed based on the research in developmental robotics and attachment theory in infants. When the robot experienced new perceptions, the increase of arousal triggered calls for attention from its human caregiver. The caregiver could choose to either calm the robot down by providing it with comfort, or to leave the robot coping with the situation on its own. When the arousal of the robot has decreased, the robot moved on to further explore the play mat. Hence, the study presented the results of two experiments using this arousal-driven control architecture. In the first setting, it is shown that such a robotic architecture allows the human caregiver to influence greatly the learning outcomes of the exploration episode, with some similarities to a primary caregiver during early childhood. In a second experiment, it was tested how human adults behaved in a similar setup with two different robots: one needy, often demanding attention, and one more independent, requesting far less care or assistance.

In Attachment Theory, the caregiver-infant relationship (Bowlby, 1958) is widely popular due to the paradigm shift of knowing how infant attachment to their mothers or caregivers works and the factors which play a role in it. This relationship was explored with the use of a Sony AIBO robot where an arousal-based model is created for a robot to stimulate responses from human caregivers, (Hoile et al., 2012). The study was successful in showcasing that the robot running on the arousal-based model was able to elicit positive caregiving behaviour from the humans instead of being left to cope with the situation the robot at any particular time. The arousal-based model essentially turned the robot either needy or independent and the human caregiver responses were recorded for either of the behaviours portrayed by the robot.

While the above study dealt mainly with this dyadic relation of human and robot, effects of long-term HRI and it’s association with the Attachment Theory was studied by exploring various factors such as attachment styles, formation and dynamics (McDorman et al., 2016). This study has thus proposed Attachment Theory as a somewhat generalised framework for understanding long-term HRI.

As mentioned before, the Sony AIBO robot experiment (Hoile et al., 2012) was successful in stimulating human caregiver responses but this showcased the human to be the response system in the human-robot relation whereas it is also important to understand how a robot might behave as a response system based on a human’s actions. This aspect was explored as well where EMYS type robots were set up to spend 10 days with humans with different attachment patterns and the robots’ operations were assessed based on their response to the various styles of attachment displayed by the humans (Dziergwa et al., 2018). The above two studies in a way represent the two sides of a coin as understanding the behaviours of a social robot playing the “infant” as well as the “caregiver” role might provide a more articulate knowledge of the Attachment Theory and its association with HRI.

Another study involving human interactions with the PARO robot (Collins, 2019) explored the Attachment Theory and HRI by drawing parallels with other forms of human interactions and bonds, such as with other humans, animals and objects. Although the results weren’t conclusive, it demonstrated how important Attachment Theory can be in understanding and developing HRI methodologies.

In conclusion, multiple studies have shown the importance of taking inspiration from Attachment Theory to better understand HRI and developing cognitive models which follow the norms such as increased attachment towards emotional stimuli and not simple, materialistic stimuli (for example, food). Advancements in HRI by considering the Attachment Theory shows great potential in more successful assistive robots which can display a personalised attachment behaviour towards humans.

Although studies similar to Harlow have not been attempted on humans where they are isolated from other humans and placed in the care of only robots, it poses an interesting question whether prolonged interaction and attachment to a social robot might reduce a human’s ability to create as well as retain other attachments with humans.

We use cookies to ensure that we give you the best experience on our website. If you continue to use this site we will assume that you are happy with it.OkNo