“The eyes are the gates to the soul” – is a commonly used phrase at the VR Days Europe 2019 in Amsterdam. On this 3-day event, people from all over the world – ranging from top CEOs to digital artists – have gathered to share ideas of- and become inspired by Virtual, Augmented, and Mixed Reality (VR, AR, XR). Besides the controversial belief whether something like a ‘soul’ truly exists, it is beyond doubt that visitors are indeed touched by the amazing technological advancements that are currently being made to make our wildest dreams come true. Examples may include 5K virtual worlds and augmented cities, but also gamified virtual rehabilitation where muscle memory is regained by virtually performing what is no longer possible in real-life. As a consequence, the line between the biological and digital world becomes blurred, which may result in an entirely new reality where humans are no longer restricted by the limits of nature.

Communicating an idea or feeling can be challenging. Storytelling is a powerful approach to explain abstract concepts. Stories are fun and can appeal to someone’s humanity such that story-listeners can truly get the core message. Along these lines, the creation of digital realities has brought about a whole different dimension to the experience of storylines, transforming passive listeners into active story-travelers. Just like that, the embodied narrative ‘The Line’ by Brazilian filmmaker Ricardo Laganaro would only make sense in VR. In this story about love and fear of change, the user is taken to the world of two miniature dolls – Pedro and Rosa – who are perfect for each other, but reluctant to break boundaries to overcome limitations and live out their love story. During his talk, Laganaro explained how the experience transforms the user into a child, and then mirrors the emotional curve of the narrative in the user’s body.

As various creations passed by, it became evident how the digital revolution has given rise to a never-ending list of possibilities in storytelling – some using Artificial Intelligence as their shaper. Whereas one designer provides a fully catered experience, letting users closely follow character evolution in a multisensory environment, another lets them give birth to little creatures that have to hear little, personal stories in order to live on (e.g. Lucas Rizzotto’s ‘Where Thoughts Go’). As a consequence, users learn to open up emotionally and experience feelings of intimacy.

At the hall that expressed itself as ‘The Church of VR’, all discussed interactive narratives and games could be tried out by visitors. Unfortunately, The Line and some other works I was keen to try appeared extremely popular, and fully booked (!) for the rest of the event. Luckily, there was enough to play with. 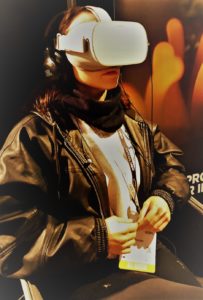 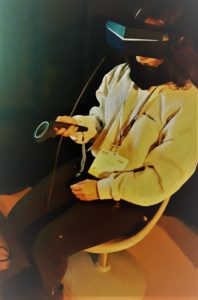 In the middle of the Church hall, visitors could watch a top-20 selection of 360-degrees videos, which VR Days Europe claimed to be made by the best creators this industry has to offer. Based on my previous experience with 360-degrees movies, I did not expect the sun, the moon, or the stars. But against expectations, I got somewhat close: the amount of detail was astounding, and the way in which virtual people addressed me felt amazingly real. As if they truly saw me. I explored undiscovered worlds through space expeditions (‘2nd World’) and found peace in my mind with ‘Headspace’. The story that stood out most to me was ‘Conscious Existence – a journey within’ by Marc Zimmerman, where pretty words and dreams are whispered in your ear. I re-experienced feelings of childhood without worries, anger, or prejudice. Everything is special, wants to be discovered, and after breaking through the dust that makes you blind, you visit some of the most breath-taking scenes in the universe.

If I would have something like a soul – it was indeed grasped.

What makes VR technology special in comparison with regular movies (if done right) is the involvement of the user. The user – or story traveler – may become the main character, who experiences a seemingly tailor-made performance. Every perceived (virtual) action seems to be a logical effect of his/her presence. As a consequence, the brain registers VR as real. The illusion of altered identity and situation is what makes VR a successful tool for various ends, including revalidation, teaching, science, and gaming.

Nevertheless, despite all the advances, there is still much to be done. After some time, VR glasses get heavy on the head, and I am curious about integrating the technology into daily life. Could VR also make our life easier? For starters, I already heard some rumors about virtual make up, and Smart Mirrors (AR). All things considered, enough to stay excited for. See you next year at VR Days Europe, 2020.